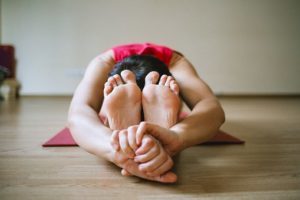 You might not have heard of Oy Vey Yoga before, but if you’re anything like me, you might already be an Oy Vey Yoga Professional. Oy Vey is part of a Yiddish phrase: oy vey is mir. I use these expressions to mean: You’ve got to be kidding or I can’t believe I’m doing this. If you’re not familiar with the phrase, possibly you’ve seen or heard it simply as oy, oy vay, oy veh, oi vey, or oy vavoy. My Granny Fanny used it extensively to mean “oy, my back,” “oy, check to see if the Pineapple Grape Jell-O is set,” or sometimes, “oy, how many people are coming?” She never complained. She lived life on a pogo stick, always moving forward, giving it her best. She would not have approved of my behavior this morning in yoga.

I did not mean to oy vey my way through class, the little words just kept popping out of my mouth. Balance on your left foot with your right foot on your left shin and your knee pointing toward the wall. Oy. I came close to toppling over but survived for another oy. That one came when it was time to plank. I loved the gang-plank scene in Peter Pan with the Clockadile hungrily waiting for a delicious human treat to hit the water, but I was unprepared for planking my own back, oy vey. It turned out there were many different moves for planking my back as well as planking my entire torso on raised hands, arms and tippy toes.

The oy veys saved me for sure. I actually stayed through the entire hour and walked out on my own steam. I even promised to return next week. It’s funny how when pushed way out of my comfort zone, words I haven’t thought of or used in years and years, just rise up to the occasion. Oy vey and hallelujah.

Stepping Back into Living History

A True Immersion Experience for a Weekend or More