Mother’s Day was created by Anna Jarvis in 1908 and became an official U.S. holiday in 1914. Soon after it began, she hated the  commercialism and worked to remove it from the national events calendar. The first Father’s Day celebration was held on June 19, 1910 at the YMCA in Spokane, Washington, organized by Sonora Smart Dodd to honor her father, a civil war veteran, William Jackson Smart, a single parent raising his six children. 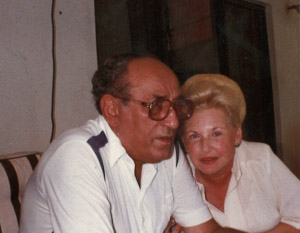 What I like most about both Mother’s Day and Father’s day is deliberately thinking about my parents and what it was like growing up with them. For me, Father’s Day is synonymous with playing Frisbee (registered trademark Wham-O Toy Company). My father was a traveling salesman, spending most of his adult life seated. When it came to exercise, he walked from the house to his car and hoisted huge jewelry cases in and out of his blue Cadillac’s trunk into clients’ stores. He only drove a Lincoln Continental or Cadillac Seville since they had trunks large enough to hold his display cases. From the moment he married my mother, he drove blue cars to match her beautiful blue eyes.

On Father’s Day he dusted off his royal blue disc-shaped flying/gliding toy and told us to line up for the great Frisbee™ Challenge, with the explanation that he was so good at it because he’d been practicing all year.  He then positioned himself in the center of our street, Fitzhugh Avenue, and later when we moved to Cutshaw Avenue, Richmond, Virginia. Neighborhood kids lined up along with us, taking turns, receiving a throw from Daddy and sending one back.

The true challenge was that he refused to move, standing rooted in one spot. His exercise was throwing and receiving the Frisbee, not retrieving poor throws. That in itself was enough to make those once a year, Frisbee exercise days both magical and memorable.
Happy Father’s Day.

The Summer Job that Got Away: Glacier National Park, Montana

Don’t Tell Me What to Wear